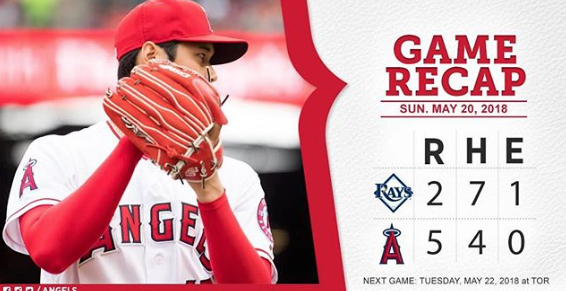 SANTA MONICA – The Los Angeles Angels of Anaheim might just be able to find redemption during the rest of the season.  Hopefully. The Angels were able to bring home its 26th win of the season yesterday, thanks to Shohei Ohtani, who claimed the 5-2 win over the Tampa Bay Rays Sunday afternoon, May 20.

The US rookie pitched into the eighth inning, held the Rays to only six hits, and gave up two runs during the night. Ohtani recorded nine strikeouts for the evening. Of the 110 pitches Ohtani threw, 68 were strikes.  He threw one walk during the night. His standout pitching combined with the Angels’ persistent offense propelled the SOCAL team out of their five game slump and helped claimed the team’s first win in over a week. The Angels recorded five runs on four hits while abandoning eight runners on base on the night.

Gloomy day, but the San was still shining.

Ohtani is poised to shatter more records before the season ends. Yesterday afternoon, he claimed the most strikeout in Angels’ history through the first seven games and became the fourth Japanese pitcher with over 50 strikeouts in his first seven games, trailing Masahiro Tanaka and Hideo Nomo by six and three respectively. He is the third A.L. player since 1908 with six or more strikeouts in six of his first seven career games as a pitcher. He moves to 4-1 on the season pitching over 40.1 innings and claiming a 3.35 ERA.