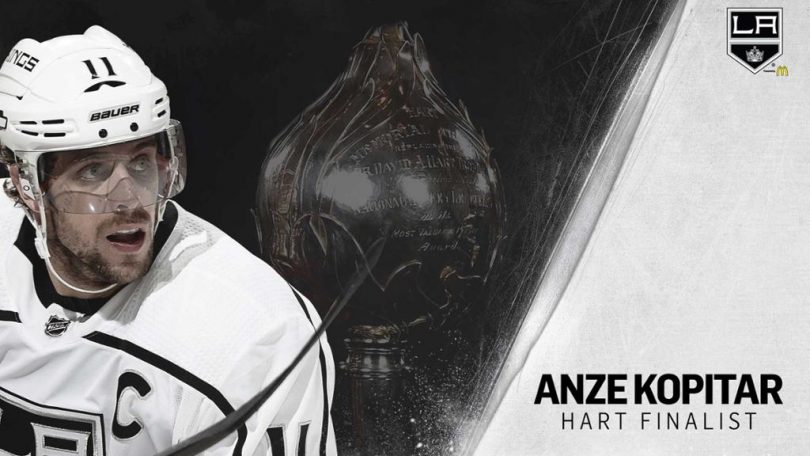 LOS ANGELES — With round two of NHL playoffs well underway, the National Hockey League is gearing up for the end of the season celebrations. Amongst them is the coveted race for the Hart Memorial Trophy. The NHL announced the three remaining nominees for the trophy last week, and amongst them was LA Kings’ very own Anze Kopitar.

Huge news! @anzekopi11 finally got recognized for how valuable he is! He might not win but a nomination is way over due!!! Congratulations! @lakings #losangeles #LosAngelesKings #harttrophy #kopitar #Kopiformvp #KopiForHart #nhl

Kopitar posted a career-high in goals, assists and points prior the league announced him as a finalist for the trophy. He currently leads the Kings franchise with 35 goals, 57 assists and 92 points while also holding the record for the most points in a single season. He currently is tied for seventh in the NHL overall, becoming the first LA king to break the top 10.

Humbled to be nominated for this historic Trophy. Thanks to @ThePHWA , @LAKings fans and especially my teammates for this great honor!

The LA Kings forward has led the team 10 out of the past 11 season and tallied his 800th point and posted 9 assists over seven games. Kopitar also won the Bill Libby Memorial Award for MVP on the team six times and the Defensive Player of the Year Award five times. The decorated vet was one of the LA Kings captains during the 2017-18 season.

The Hart Memorial Trophy is awarded annually “to the player judged to be the most valuable to his team.” The selection process through poll of the Profession Hockey Writers’ Association throughout the US. Should Kopitar be selected, he will become the second player in the LA Kings’ franchise history to be selected for the away, bringing it home for the first time since 1989.