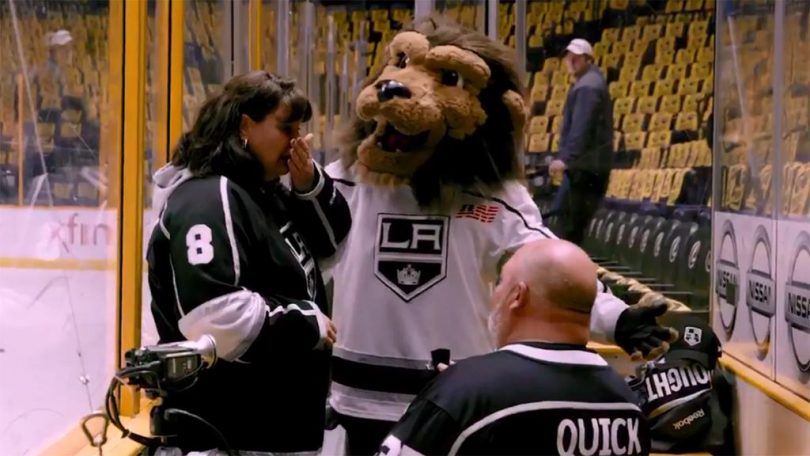 LOS ANGELES — Social Media can be more frustrating and demoralizing than helpful. Everyone has the friend or page they follow that just spams the feed with political garbage. However, Bailey the Lion of the LA Kings might just be the best way to clean up one’s thread and brighten the day a bit.

Thank you @BaileyLAKings for a fun morning! All the kids had a blast! I hope you did too 😀 pic.twitter.com/P9fv2TByUz

Bailey the Lion brings a unique flare to the social media world and will spread the negativity in your thread. Probably his most popular posts involve car chases that come across on the news in California. Bailey posts 15-30 second clips of the live chase, giving live commentary of the chases such as the music playing out of the radio. In fact, he defines the car chases as part of his job description.

Oh no he changed the radio channel #Chase pic.twitter.com/gT3ajkZG7i

But while the car chases are fun and entertaining, Bailey has a sentimental and emotional side to him as well. He often retweets hockey fans emotional tweets about losing family or struggling with a disease. He’ll even tweet some of them back a couple of time and keep his fans engaged in the fights he cares about.

You got a supporter in LA forever! https://t.co/ZMknIYEfFW

Don’t worry though, Bailey is still a big fan of the NHL and the Kings. He keeps his thread pretty up-to-date with all the latest news on what’s going on in the world of hockey. The lion makes sure to retweet his teammates and fellow mascots across the league, making sure everyone knows how well his team is doing.

Celebrating @AnzeKopitar ‘s Hart trophy nomination by getting a @McDonalds_SoCal McFlurry that he won my earlier in the year! #McFlurryMinute pic.twitter.com/cvH8zUW0qj