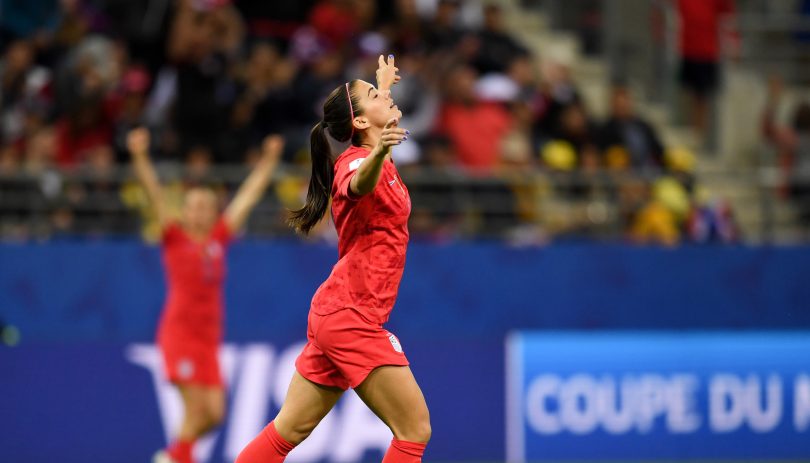 SANTA MONICA – Since I have been covering soccer, Alex Morgan has been an icon. A player to be reckoned with. Last night, after scoring five goals last night, the Southern California native cemented her place as a soccer legend.

Four years ago, I was in Vancouver, Canada and watched Morgan and USA National Team beat the Japanese National Team 5 – 2 to win the Championship in the Women’s World Cup.  There has always been a rivalry between the USA and Japanese teams.  In 2015, the team USA took home the trophy and set their sights for France 2019.

I was also in Belo Horizonte, Brazil in 2014 when the Germany team beat the Brazilians, in front of a home crowd, 7 – 1.  It was a disgrace.  Not because the Germans handed the Brazilians their hats and effectively re-educated them in the beautiful game but because the Brazilians have always thought themselves undefeatable and the premier soccer country in the world.  The entire country of Brazil wept at the same moment.  It was an emotional moment that still brings tears.

Last night, the USA Women’s team outmatched, outplayed, and easily beat the Thailand team 13 – 0.  There is a lot of backlash over the final score during play.  “Did Team USA need to beat the fledgling Thais so much?” people have wondered.  “Would it have shown maturity or professional etiquette on the side of Team USA if they had taken pity on the Thais?”

The short answer is “no”.

Team USA had to keep the pressure on and on and on.  FIFA created a goal differential scoring system that enables the teams with the highest differentials to play against teams with lower differentials.  This effectively weeds out the weaker teams early in the tournament so that stronger teams can meet up in the quarter-finals, semi-finals, and the finals.

Let’s face it folks, this is not youth soccer.  Players who play at the professional and national levels have already gone through years of play in which they were told to pass the ball instead of score against a weaker team.

If this was the Men’s World Cup, a blow-out wouldn’t be an issue – review the examples above.  But since this is a Women’s World Cup, and the world holds women to a different standard, we are having this conversation.

One final note, the World Cup is a long tournament.   Anyone can win.  While the USA looked very strong against Thailand, there are still strong teams on the road ahead.  Anything can happen during this tournament; players can get injured, red cards can be awarded, or an Underdog can rise up and become victorious.  But that is why we watch sports.  We want to see something magical?  For normal people, we can only dream about standing in the center of an arena surrounded by the deafening applause of 40,000 manic fans.  To see David beat Goliath or live vicariously through those elegant players that dominate the game is something we all secretly want to experience.