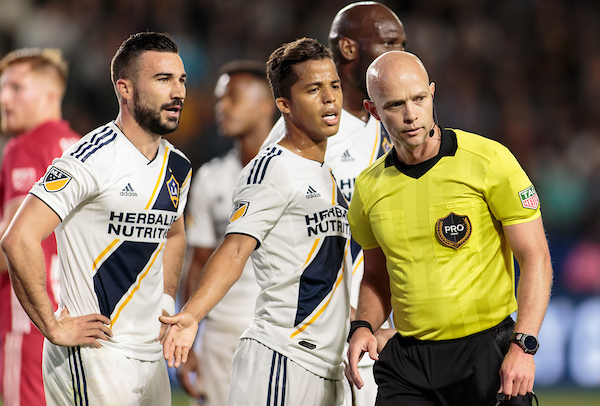 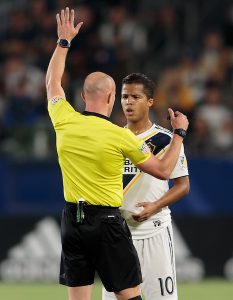 Giovani dos Santos talks to the ref about a call made Saturday afternoon.

SANTA MONICA – The Galaxy just couldn’t keep things clean when they need them to be in order to get ahead. LA Galaxy fell 3-2 to the N.Y. Red Bulls Saturday afternoon in Los Angeles.

The home team struggled with the officiants during Saturday night’s match. They watched as goal after goal was retracted, but it didn’t stop them from attempting to get things done. The Galaxy came back to score two back-to-back goals in the second half. Within 10 minutes Ola Kamara and Giovani dos Santos pounded in a goal each to finally equalize the game. Unfortunately for the home team, it wasn’t enough to hold on.

In the 83rd minute, the Galaxy was called for handling the ball inside the box, setting New York up for a penalty kick to take the lead. The Bulls’ wing Alejandro Romero made sure not to waste the opportunity, pushing a hard, low shot into the side netting.

The little mistakes by the Galaxy ended up costing them the game. LA had two goals retracted due to offsides, leaving the home team heartbroken from the loss. The LA Galaxy recorded six offsides and nine fouls on the night, coughing up the game-winning penalty kick in the 83rd minute.