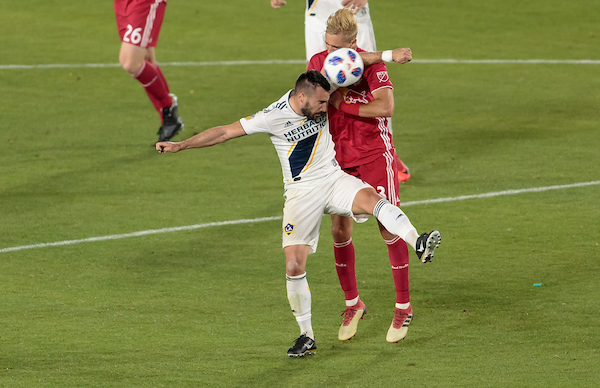 SANTA MONICA – The Galaxy have taken a turn for the worse after a decent start to the season. A game full of missed opportunities, near goals, and a rally that fell short and left them heartbroken as they walked off the field. LA took its fourth consecutive loss Saturday against FC Dallas, losing 3-2 and dropping to the bottom of the Western Conference standings.

LA watched their chances of winning the match fade, much like each shot that went high and wide of the goal.  The Galaxy haven’t won a game since Zlatan Ibrahimovic last scored on April 14; unfortunately for LA, Ibrahimovic wasn’t enough Saturday night. He missed an wide open bicycle kick and minutes later watched a mis-trapped ball fly over the crossbar all before the 25th minute. The Galaxy didn’t find their first goal until the second half when Ola Karama headed in a cross from Romain Alessandrini on a corner. Unfortunately for Galaxy, FC Dallas extended their lead to 3-1 in the subsequent five minutes.

But it wasn’t always looking down for the Galaxy, a late goal in the 83rd minute for Emmanuel Boteng spurred LA to a 3-2 deficit and reignited the a small spark under their feet. However, nearly in, almost a goal was all LA fans were able to walk away and talk about. In the 88th minute, a free kick awarded to the Galaxy just outside the 18 set the Galaxy up for a draw on the night which could only help them as they begin to fade in the conference standings. Yet once against Ibrahimovic watched his shot fly off target and wide of the frame, handing the Galaxy another loss on the season.