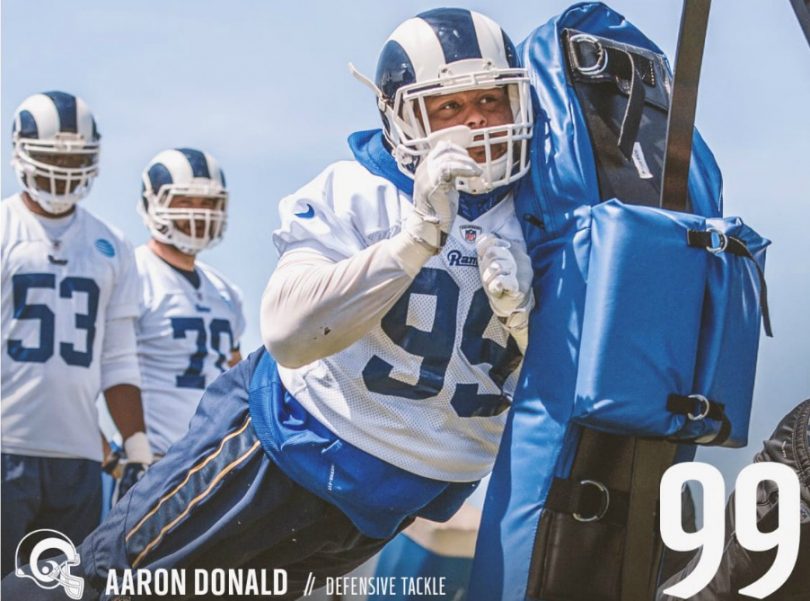 SANTA MONICA — The LA Rams seem not be locking everyone and everything except for Aaron Donald. While running back Todd Gurley signed a four-year contract with the rams for $60 million and Brandin Cooks signed a five-year extension for $81 million, Donald continues to wait for a new contract on his rookie deal.

The 2014 first-round pick, defensive tackle heads into the final season of his rookie contract which should garner him $6.9 million in earnings this season. However, Donald is holding out for a new contract for the second year in a row, failing to appear to the start of training camp. If he fails to report by Aug. 7, he will remain a restricted free agent following the 2018-19 season.

HIs failure to appear Wednesday isn’t shocking as he only showed up at the last possible minute — the eve of opener — as he held out for a new contract that never came. He was activated in Week 2 of the 2017 season. This season seems to be headed in the same direction.

There is much speculation on why the Rams have not offered Donald a new contract yet despite offering an extension to unproved wideout Cooks. From fear that Donald will cease to try as hard should they offer a contact or that he’ll find himself seriously injured early on in the contract are just some of the reasons circulating as to why the Rams refuse to offer him the money.

However, despite al the speculation, it seems inevitable that the Rams will pay Donald eventually. With the desperate need for a standout defensive tackle among the league, LA will be seeking to extend his contract, and it is simply a matter of time until they do. NFL Nation reporter Lindsey Thiry explained that “Because of the salary cap — and the need to field an entire team, not just a defensive tackle — they cannot overspend at the position, regardless of how good Donald is.” She did state that Donald should be the highest-paid defensive player due to his defensive performance.

The Rams have suggested that they are working with Donald on a new contract and keep him in LA.

”We’re simultaneously working to make Aaron a Ram a long time — that’s the goal,” Ram GM Les Snead said of Donald on Tuesday. ”I know we’ll get questions about him, but Aaron’s a big part of who we are, where we want to go. We’re going to continue working to get something done with Aaron.

”We want to definitely try to pay Aaron what he’s deserved and make him a Ram a long time.”