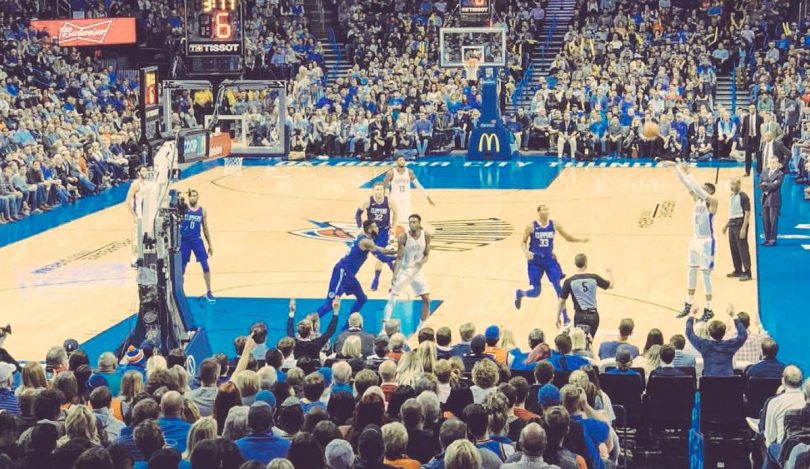 SANTA MONICA – In a high energy game full of back and forth runs, the shorthanded Los Angeles Clippers fell to the Oklahoma City Thunder by a score of 120-111 at the Chesapeake Energy Arena on Friday night.

Both teams came into the game hungry for a win, as they each have been struggling to find their rhythm early in the season. The Thunder and their big three made up of Russell Westbrook, Paul George, and Carmelo Anthony entered the game with a meager 3-7 record, and have had trouble finding fluidity in their offense. For the Clippers, their rocky play has been largely due to the early injuries of key players Milos Teodosic, Danilo Gallinari, and Patrick Beverley, all of whom were out tonight against the Thunder. The Thunder were also missing a big piece in their lineup, with center Steven Adams out with a right calf contusion.

Led by all star point guard Russell Westbrook, the Thunder started off the game with great energy and quickly were able to capture an early 14 point lead. Westbrook left the first quarter with 10 points and 3 steals, but once he went to the bench the energy the Thunder had started with died down, which allowed the Clippers to dig their way back into the game. The Clippers went on a 14-3 run, which they capped off with a last second midcourt heave from Lou Williams that gave them the lead going into the second quarter.

The game continued to go back and forth, with players from both teams leading their teams with high spirited play and scoring spurs. For the Clippers, Lou Williams came up big with 35 points 7 rebounds and 3 assists, and for the Thunder carrying them was Paul George with a season high 42 points, 9 rebounds and 7 assists.

The bench played a big part in keeping the Clippers in the game, most notably was of course Lou Williams and even Willie Reed, who ended with 15 points and 8 rebounds. Reed saw a bit more playing time than usual with Deandre Jordan getting in early foul trouble. Fouling for both teams in fact was extremely high this game, with the officials calling 59 personal fouls.

But, after the Clippers manage to claw away at the Thunders big leads, they still were unable to contain a Paul George led Thunder offense. With this loss, the Clippers are now brought to a 5-6 record, and will hope to snap their current losing streak next against the New Orleans Pelicans on Sunday at the Smoothie King Center.