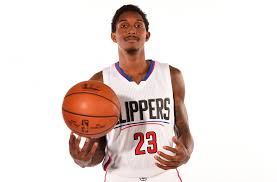 SANTA MONICA – On Tuesday Los Angeles Clippers guard Lou Williams was crowned sixth man of the year once again, beating out Eric Gordon of the Houston Rockets and Fred VanVleet of the Toronto Raptors.

“I want to thank the Clippers organization for giving me an opportunity to be myself.” Clippers’ guard Lou Williams takes home the 2018 Sixth Man of the Year Award! Watch highlights from Inside the NBA with Shaq, Charles Barkley, Kenny Smith and Ernie Johnson and more!

The 31-year-old had his best season yet in his first year with the Clippers. Averaging career highs in points and assists, Williams anchored the Clipper offense as a prolific scorer and crafty playmaker. He ended the season averaging 22.6 points, on 43.5% shooting and 35.9% behind the arc and led all bench players in scoring.

In a season where the Clippers were transitioning out of their Lob City era Williams was a vital part in leading them to a 42-40 record. Williams’ was signed to a three year $24 million extension in February and will be a big factor as Los Angeles hopes to bounce back from a lackluster season.