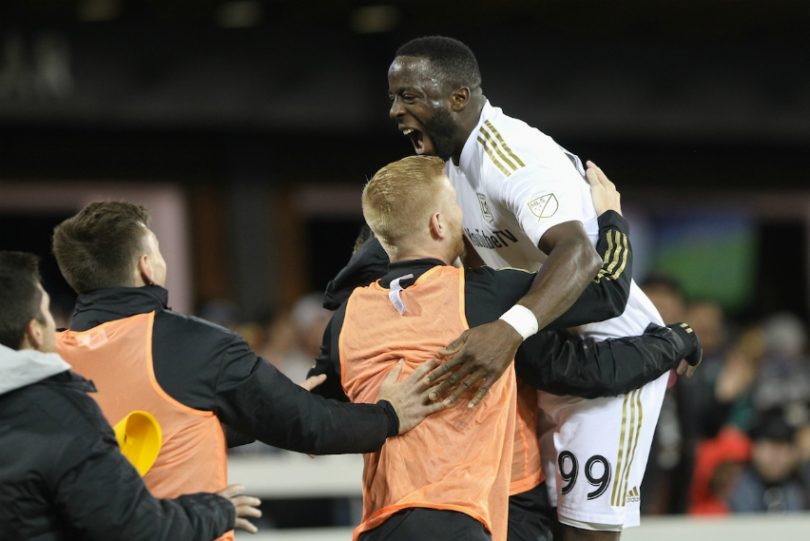 SANTA MONICA — Despite having three of its regular players competing in the World Cup earlier for several weeks now, LAFC seems to be doing just fine and seeing more production from different players in their absence. Adama Diomandé led LAFC to a 4-1 victory over the Philadelphia Union Saturday evening at Banc of California Stadium as LAFC claimed its fourth straight win, becoming the team’s longest winning streak to date.

Your @lafc3252 YouTube TV Man of the Match, @diomxnde.

Diomandé couldn’t be stopped Saturday. A force on the field, he danced around defenses, outmaneuvered the keeper and found the undefended space throughout the night, claiming a hat trick by the 55th minute of play. Diomandé started his attack by the 25th minute of regular time. Receiving the ball just outside the top of the 18, he battled a Philadelphia defender, cutting back twice en route to a wide open shot into the far post net just beyond the keeper’s reach. He was far from done though.

By the 43rd minute, Diomandé was at it again with the help of his teammates this time. LAFC worked the ball fast and precisely through the field. Latif Blessing carried it to the edge of the field before passing it into Benny Feilhaber who dumped it off to a cutting Mark Kaye. Kaye pushed the ball into the box where Diomandé awaited behind an unaware defenders and tapped the ball past the keeper. He clinched his hat trick in the 55th minute after kicking in a loose ball that came off deflected shot.

LAFC’s final goal came off a defended shot that couldn’t be pulled in. Blessing crashed the box after Philadelphia keeper was unable to grab hold of the ball, allowing Blessing to poke the ball in for the home team.

Undefeated at home. Highlights from our 4-1 win over @philaunion, brought to you by @sherwinwilliams.

LAFC finished the night going 8 for 11 on goal and recorded four corners. LAFC moves to 9-3-4 on the season as it closes in on FC Dallas and Sporting KC for the West Conference title. Philadelphia falls further in its season to 6-3-8. LAFC will continue its season against Houston at 6 p.m. Tuesday, July 2, before facing Orlando City on Saturday, July 7, at 1:30 p.m.