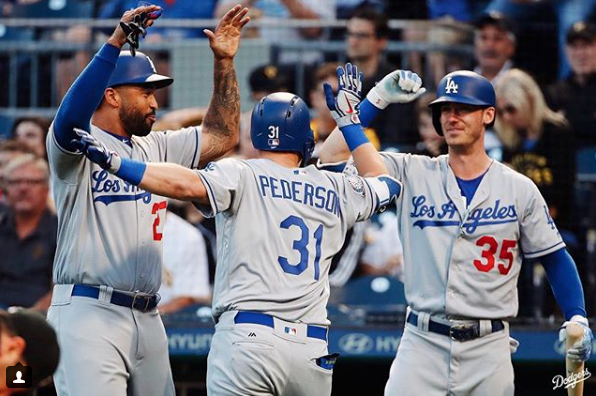 SANTA MONICA — The Dodgers found its way back to a .500 after a shutout win Tuesday night in Pittsburg. LA homered its way to a 5-0 shutout against the Pirates.

@cody_bellinger got all of that one. #Crushed

The Dodgers hit a rut earlier in the season that dragged it to a rough loosing record. Climbing back over the last four weeks from a 16-20 record, the Dodgers took its 30th win out of its 60 total games, finally breaking away from the losing record its carried since April 24. Since May 16, LA has rallied back using a 14-4 record with a current 4-game winning streak.

“We’re back in the mix,” Dodger manager Dave Roberts said. “Now the goal is to keep playing good baseball.”

After an hour weather delay, the Dodgers wasted no time getting things going. After Matt Kemp led off with singled to left, Joc Pederson hit a dinger deep over the fence to jump out to an early 2-0. Two innings later, they were doing it again in the top of the fourth with Yasiel Puig homered on the fourth pitch of the inning. Cody Bellinger sent the Dodgers’ third homer of the night over the fence in the sixth for its 5-0 win.

“I was able to capitalize on a mistake today,” Pederson said.

But it wasn’t just the Dodgers’ offense cleaning up the night. Pitcher Ross Stripling threw over 5 innings for seven strikeouts and giving up four hits and no walks. His defense gave up no errors and shut down the Pirates scoring opportunities.

Several times Stripling restricted the Pirates offense to three bats in an inning, striking out a number of players with a simple fastball. He credits the night to a great scouting report on the Pirates.

“When you hand me a scouting report to prepare, and a guy has a certain hole, I can throw that pitch, more than likely,” Stripling said. “Because I can basically manipulate a ball in most ways, besides sinking it.”

The win puts the Dodger poised to take over first place in the NL West standings with the Diamondbacks in first with 32 wins and Rockies in second with 31 and brings the Dodgers back in contention for playoffs.