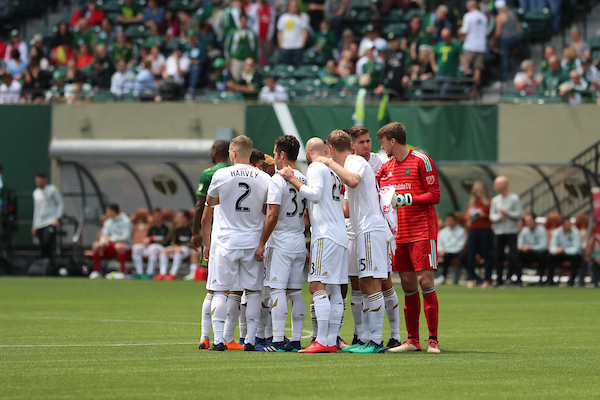 LAFC has nothing to prove after its standout performance against Christian Pulisic and Borussia Dortmund. While LA settled for a 1-1 draw with Dortmund Tuesday night, the German’s won’t forget the stellar performance LAFC left on the pitch in its first ever friendly.

“They definitely tested us,” Pulisic said. “This wasn’t an easy game. We enjoyed it.”

Full highlights from #LAFCvBVB, brought to you by @sherwinwilliams

“Great night for fútbal, amazing crowd, fantastic field, fun game, two teams that enjoyed the fútbal and great spectators that made it a great atmosphere and I think enjoyed the fútbal. It’s what it is suppose to be,” said head coach Bob Bradley immediately following the game.

While Borussia took the first shot 40 seconds into the match, LAFC threatened with the first real shot at the six minute mark as Laurent Ciman headed a corner kick toward the back post in an effort to slide one past Dortmund’s Roman Weidenfeller. Five minutes later, Carlos Vela passed a through ball to Diego Rossi who waited for a second before passing back to Vela. Vela booted one to force Weidenfeller to make another save. Three minutes later, LAFC was knocking on Dortmund’s door again, threatening with another potential shot. A Dortumund defender disrupted the play as he slid into the pass and sent it out of bounds.

Scoreless at the half. #LAFCvBVB

“We had stretches where the ideas that are important to us — the way the ball moves, the way we move, the timing — I thought we had a lot of good stretches,” said Bradley, “and…we appreciate the opportunity and playing against a good team. Most guys would tell you it was…more fun than training this morning.”

It was a long night for Dortmund still as LAFC threatened time and time again for the full 90 minutes. Finally, LAFC found its chance, breaking down the German defense in the 77th minute.

The @sanmanuelcasino Thrill of the Match: @aokovar gives #LAFC the lead against @bvb09!

LAFC’s Lee Nguyen managed to dance his way through the Dortmund defense, shoving the pass off wide left for a give-and-go. Nguyen, now free of defenders, crossed low into the box as teammate Aaron Kovar crashed, fighting tooth and nail against a defender before landing a foot on the ball to push it past the off-balanced keeper.

“(It felt) good. It was awesome especially that side in front of everybody,” said Kovar. “I probably could have had another one or maybe even two. That’s the step forward, but I’m just glad one went in.”

LAFC will return to the Banc of California Stadium Saturday to face off with DC United at 7 p.m. PT.