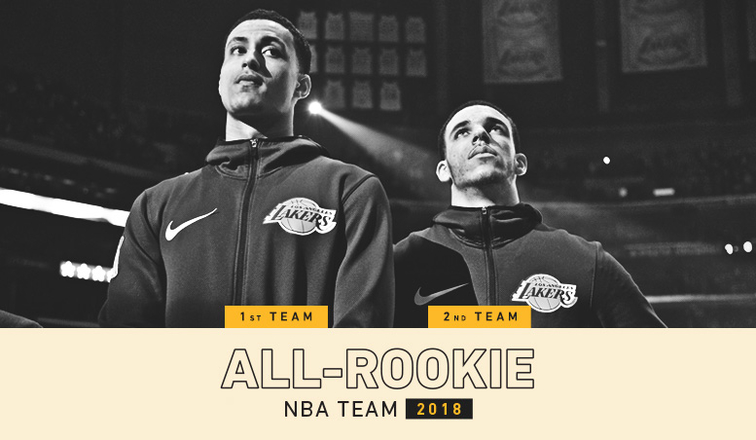 And they’re just getting started #LakeShow

As the 27th overall draft pick in 2017, Kuzma became the leading rookie 3-point shooter in the team’s history and the first rookie in Lakers’ history to sink 25 or more points in three consecutive games since the 1960-61 season when Jerry West did it. He lead the team averaging 16.7 points, 6.1 rebounds, and 1.6 assists and shot 50.4 percent in the first 20 games of his career. He was selected for the Kia NBA Western Conference Rookie of the Month in October and November. He recorded 37 games as a starter this season and finished his rookie season ranked second in points per game by a rookie with 16.1.

Ball was selected second overall in the 2017 NBA draft. He started 50 games while playing 52 total this season. Ball averaged 10.2 points a game, 6.9 rebounds, 7.2 assists and 1.7 steals. He tied for first in most steals by a rookie and was second in assists by a rookie. He wrapped his rookie season with 13 double-doubles and two triple-doubles to tie “Lebron James as the youngest player in NBA history to record multiple triple-double games,” according to the press release.

These three shining bright during #NBAAllStar weekend is our @budweiserusa Moment of the Week.

Ball and Kuzma — along with Brandon Ingram — were selected along with seven other NBA rookies and sophomore players to play in the Mtn Dew Kickstart Rising Stars Game at the NBA All-Star 2018.