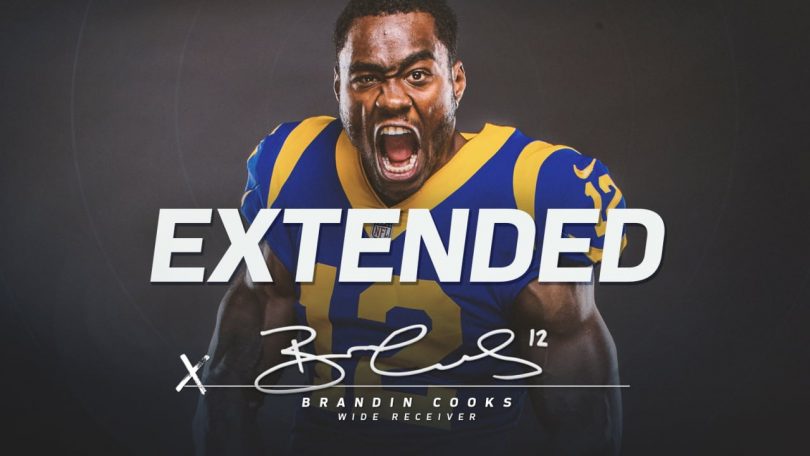 SANTA MONICA — The Rams seem to really like what they’ve been seeing with wide receiver Brandin Cooks. Tuesday afternoon the LA Rams announced Cooks signed a five-year extension to his contract for $80 million.

The Rams haven’t seen a minute of Cooks, 24, playing on the field outside of practice, but that didn’t matter to head coach Sean McVay. The promise Cooks has shown since being acquired by LA in the offseason from the Patriots was enough to convince McVay to extend his contract.

“Brandin Cooks has shown himself to be a class act on and off the field since the first day he joined our team,” McVay said in a statement. “He’s a proven professional in this league and signing him to a long-term contract was always our goal.”

Cooks, however, has simply been waiting for the offer since he arrived, knowing he wanted exactly what LA was offering its players.

He will finish his final season of his rookie contract this year before the five year extension will take effect. Cooks played his first three years with the New Orleans Saints before being traded to the Patriots for the 2017 season. He has recorded 3,944 receiving yards on 280 catches to convert 27 touchdowns over the last four years.

The contract will keep the wide receiver in LA through the 2023 season.

“It’s a young culture that is very energetic.

“I just knew that this is a place where I want to be for a really long time,” Cooks said, adding, “I’m just excited to get Game 1 let alone six years. So that’s what I’m focused on now.”

Up to something🏹 @rams #12disciples #nfl

The Rams traded their No. 23 overall draft pick and a sixth-round selection in the 2018 draft to the Patriots for Cooks. He joins Roberts Woods and Cooper Kupp as what is expected to be the Rams’ top three wide receivers.

LA kicks of its training camp on July 26.