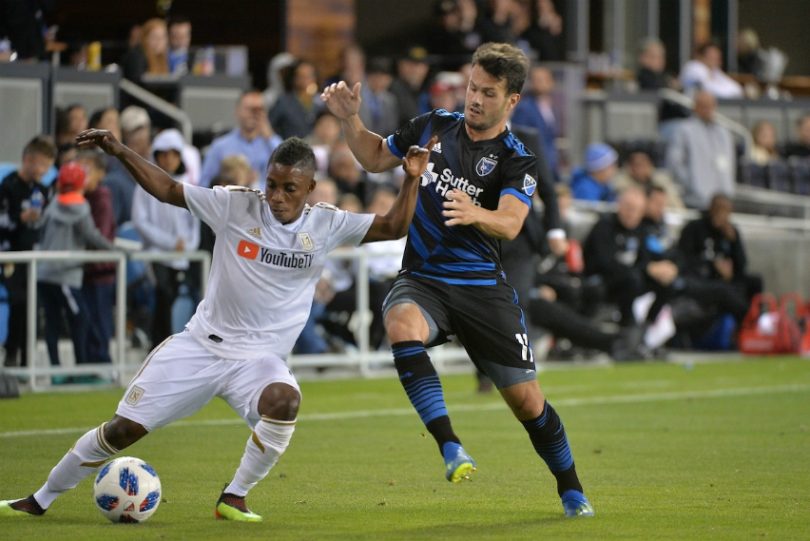 SANTA MONICA — One vital mistake can completely change the outcome of a game, and fortunately for LAFC, it was in their favor this time. LAFC edged out San Jose 4-3 Saturday night at Avaya Stadium.

A terrible mistake by San Jose gave LAFC the opening it needed to pull out a victory. In the sixth minute of stoppage time, San Jose’s Kevin Partida challenged a ball in Latif Blessing’s possession, but a small nudge by Blessing pushed the ball out of Partida’s path, forcing the two to collide and resulting in a yellow for Partida. However, as his second yellow of the night, Partida was sent off the field, putting LAFC up for the last couple minutes of play, but it was enough for the away to make its move. In the seventh and final minute of stoppage time, Latif Blessing pushed the ball into a crashing Joao Moutinho who slid a shot through the defense to steal the lead 4-3.

WHAT. AN. ENDING. The @sanmanuelcasino Thrill of the Match: Our miraculous comeback in stoppage time!

Before the last minute, the game was closely locked as the teams went shot for shot and goal for goal throughout the game, but a dynamic offense pushed LAFC to victory. LA saw three different players score the night as Adama Diomande and Steven Beitashour scored in the first 20 minutes. Diomande scored a second goal in the final minute of regular play to tie the game. LAFC went 5 for 14 on the night and tallied three corners.

LAFC returns to the field on Wednesday to face Sacramento Republic at 7:30 p.m.