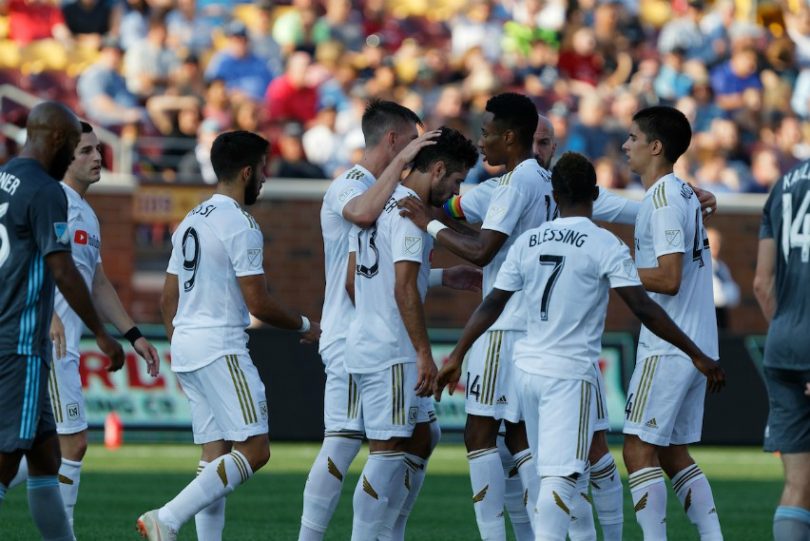 SANTA MONICA — It was not LAFC’s week. In an uncharacteristic performance, the LA Futbal Club fell 5-1 to Minnesota United Sunday afternoon at TCF Bank Stadium.

Rough night in Minnesota. Full highlights from #MINvLAFC brought to you by @sherwinwilliams.

There was nothing fun to watch about the game Sunday for LA fans. LAFC took a beating that it just never recovered from. By the 58th minute, Minnesota booted all five goals, scoring the majority of the shots before halftime. LAFC dominated on possession — controlling 58 percent, maintained a 84 percent passing accuracy and only gave up three fouls, yet the defense repeatedly made game changing mistakes to allow an easy goal for Minnesota.

Minnesota goals mostly came off a LAFC mistake rather than a great play. Miguel Ibarra stole the ball  in the keeper’s box in the 56th minute after a LA defender overstepped the ball, allowing Ibarra to slide the ball outside LAFC goalkeeper Tyler Miller’s reach. In the 45th minute, LAFC defense deflected a ball which rolled closer to the goal. Christian Ramirez wasted no time charging the ball and catching Miller off balance for another easy goal. In fact, Minnesota only created opportunity came in the 58th minute as Ibarra sent a pass over the back line to Ramirez who drew the Miller out for a one-on-one situation before kicking it past the crashing keeper.

The @sanmanuelcasino Thrill of the Match: @bfeilhaber10’s goal in his 200th career @mls start.

LAFC’s sole goal came in the 26th minute as Benny Felihaber responded to Minnesota United’s first goal. After a number of deflection, Latif Blessing passed the ball to an undefended Felihaber who took one touch to set up the ball for a left footed shot. LAFC managed to put seven of its shots on target and recorded a massive 15 corners while Minnesota went 11 for 16 on goal and tallied four corners.