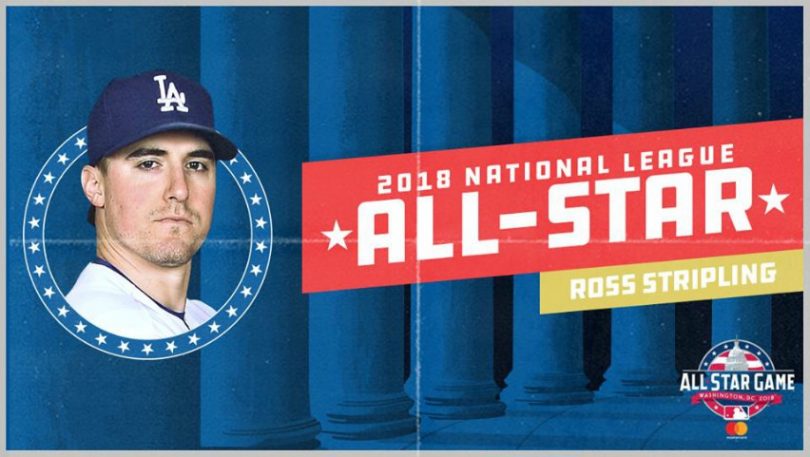 SANTA MONICA — Ross Stripling finally got into one of the MLB’s most exclusive clubs, the NL All Star team, but it wasn’t clear how much Stripling wanted it until he saw Max Muncy working on the All-Star information sheet, a requirement for the Final Voting process on the administrative sign.

It wasn’t about the title but rather what a place on the team represented — a higher level of play. This is Stripling’s first time clinching a spot on the National League All-Star squad. He replaces Cardinals; Miles MIkolas.

“Disappointed was not the right word, because I did fine, but I wanted it. Muncy’s over there filling it out and I’m like, I want to be there,” said Stripling.

Stripling earned his place on the squad this season after a breakout performance becoming a key pitcher for the Dodgers. He currently sits at 7-2  on the season with a 2.22 ERA and has recorded 103 strikeouts over 89.33 innings.

Good vibes for the Dodgers heading into Memorial Day Weekend!

The 28-year-old pitcher has moved through the Dodgers ranks this season, starting the season as a bullpen pitcher before transitioning into its starting rotation as the lineup became riddled with injuries over time. Stripling carried LA through many hardships as Ace pitchers Clayton Kershaw and Rich Hill suffered several trips to the injured list.

“From where I started, coming off TJ [Tommy John] surgery, making the team in ’16, and finding my way into the bullpen and starting this season in the bullpen and guys go down and just being someone the team can count on to take the ball every fifth day,” he said. “To be an All-Star midway through is special and something I’ll remember forever.”

Outfielder Matt Kemp and closer Kenley Jansen join Stripling on the NL All-Star team. All-Star squad will be managed by Dave Roberts. Kemp will be making his third All-Star appearance since 2012, being voted on by the fans. Jansen returns to the squad for the third consecutive time, receiving the votes from his peers.